Computer Vision has become a worldwide mainstream research area. Catalonia has an extensive community in the field since most of Catalan universities have research groups dedicated to its study and many small and large companies are leading the development of products using these technologies. The aim of this meeting is threefold:  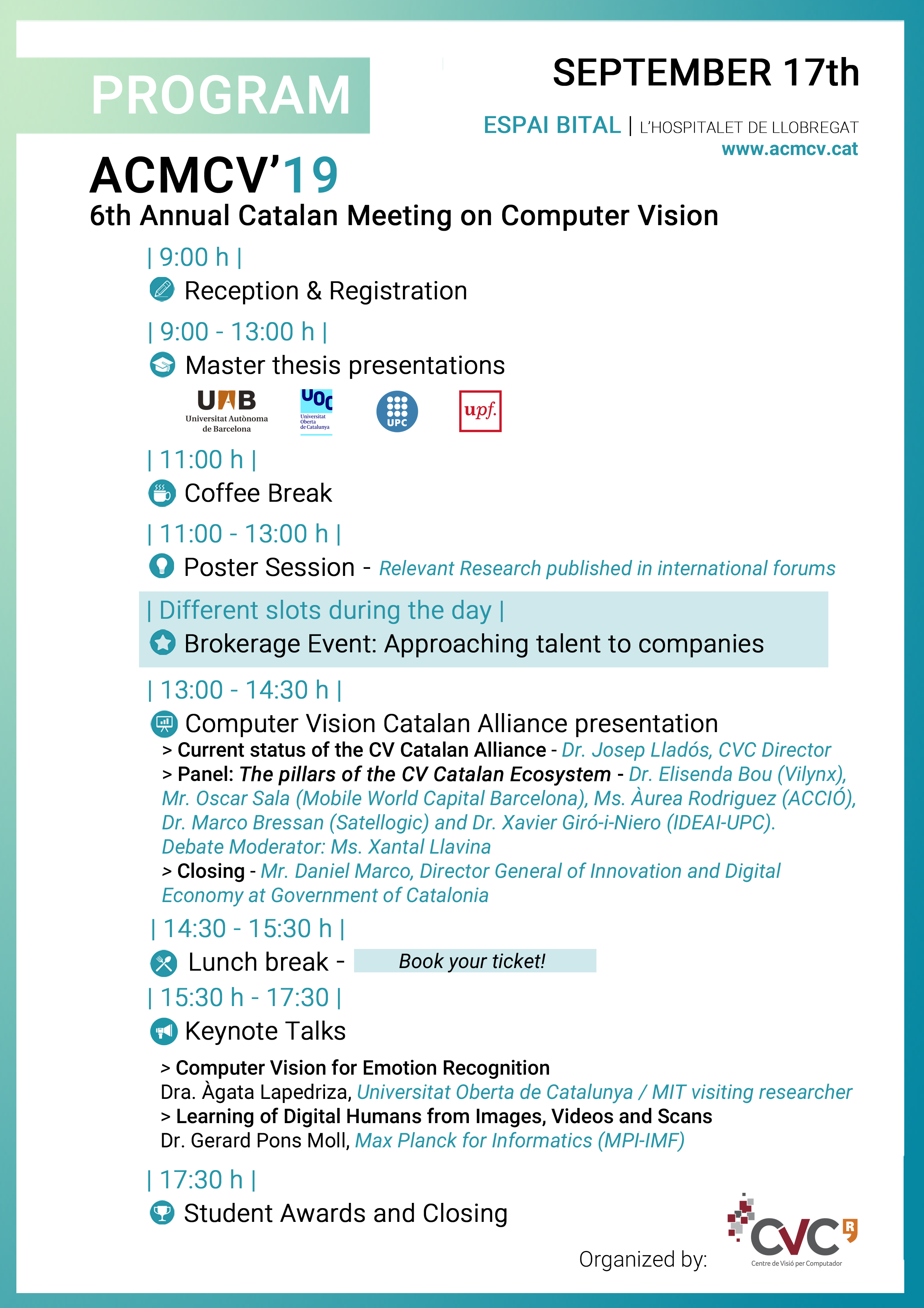 Gerard Pons-Moll is the head of the Emmy Noether independent research group “Real Virtual Humans” and senior researcher at the Max Planck for Informatics (MPII) in Saarbrücken, Germany, and junior faculty at Saarland Informatics Campus. His research lies at the intersection of computer vision, computer graphics and machine learning — with special focus on analyzing people in videos, and creating virtual human models by “looking” at real ones. His research has produced some of the most advanced statistical human body models of pose, shape, soft-tissue and clothing (which are currently used for a number of applications in industry and research), as well as algorithms to track and reconstruct 3D people models from images, video, depth, and IMUs. His work has received several awards including an Emmy Noether Starting Grant (2018), a Google Faculty Research Award (2019), Best Papers at BMVC’13, Eurographics’17, 3DV’18 and has been published at the top venues and journals including CVPR, ICCV, Siggraph, Eurographics, IJCV and PAMI.

Agata Lapedriza is a Professor at the Universitat Oberta de Catalunya. She received her MS degree in Mathematics at the Universitat de Barcelona and her Ph.D. degree in Computer Science at the Computer Vision Center, at the Universitat Autonoma Barcelona. She was working as a Visiting Researcher in the Computer Science and Artificial Intelligence Lab, at the Massachusetts Institute of Technology (MIT), from 2012 until 2015. Currently she is also a Visiting Researcher at the Affective Computing Group at MIT Medialab, where she leads the project of Emotion Recognition in Context. At MIT, she also colallaborates in different projects related to Human-Robot Interaction and Machine Perception. Her research interests are related to Computer Vision (Image and Scene Understanding), Natural Language Processing, Emotional Artificial Intelligence, and Explainable AI. She is also interested in the applications of these topics to Emotional Wellbeing, Social Robotics, and Education.

During ACMCV 2019, it took place the kick-off presentation of the Computer Vision Catalan Alliance. This terriotorial alliance aims to promote and foster collaboration within the Computer Vision ecosystem, joining the expertise of  researchers and entrepreneurs in this discipline who are currently based in Catalonia. Dr. Josep Lladós, CVC’s Director, gave a brief introduction and context of the Alliance. Directly after that, there was a panel discussion on the pilars of the Computer Vision Catalan Ecosystem with actors from both industry and Academia: Dr. Elisenda Bou (Vilynx), Mr. Oscar Sala (MWC Barcelona), Dr. Marco Bressan (Satellogic) and Dr. Xavier Giró (IDEAI-UPC). The debate was moderated by Xantal Llavina (TV3 journalist) and closed by the Director of Innovation and Digital Economy of the Catalan Government, Mr. Daniel Marco.